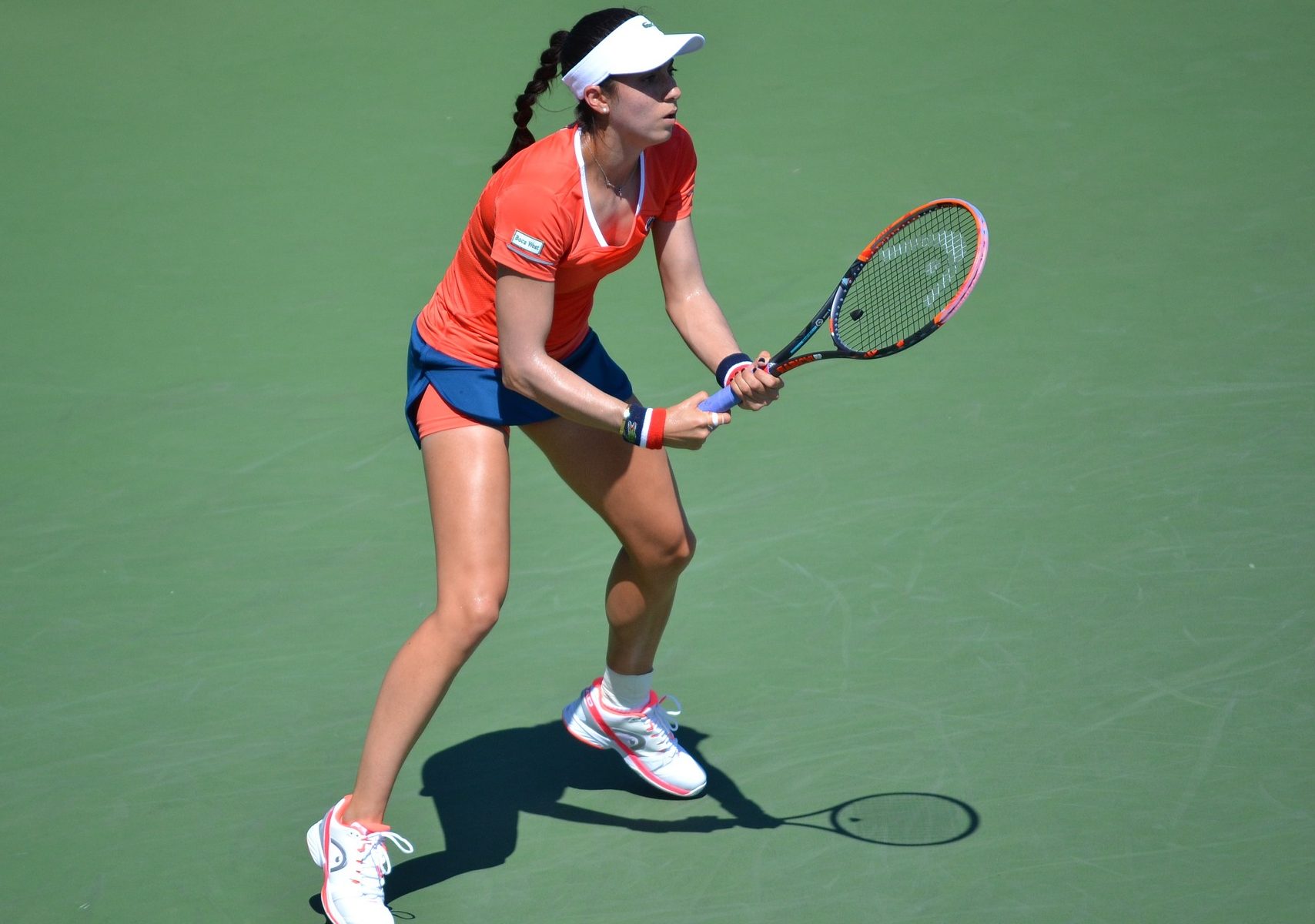 All of us want to have textbook strokes, and awesome form and power in all our shots, just like the pros. If we did, we would BE pro tennis players. In reality we all have less than perfect strokes, physical limitations, etc. Thus the subject of this post, Working with the tennis game you’ve got. In the next few minutes we will take a quick look at ways you can maximize results and minimize weaknesses in your game.

So analyze your game, identify your strengths, be positive and confident in yourself, and stick to your game. And remember to have fun out there!

This week’s tip is in response to a reader’s question.

“…why is it that I can play against 3.5 guys and beat them and even hold my own against a 4.0 guy….but when I play league play against women I play like crap and lose?  (I’m rated 3.0 woman…..probably should be a 3.5)… When I play women, their serves are so easy I stand way inside to receive and this seems to throw the whole thing off.  And I’m sure lots of it is mental.  For some reason I just have a ton more confidence playing against a guy.”

I think I know the problem and yes it is a little mental. Two things are happening.

Answer: You just need to keep your eye on the ball, your feet moving and try not to over hit. Keep the ball in play and expect long points. Once you get into the match and get used to the slower pace, you can start to hit out a little more and go for more winners. Check out these previous tips for more help…One More Ball, Mental Focus, Move Your Feet, and Play Like a Dog

A one-dimensional ground stroke style allows opponents to adjust to your game. To keep them on the defensive (an you on the offensive), learn a variety of spins and when to use them. Let’s take a look at some useful spin variations.

1. High-looping topspin – almost like a lob with topspin, this style pushes your opponent back and keeps them from being able to hurt you, because their contact point is above their strike zone and behind the baseline. It has the added benefit of producing errors or short balls you can attack.

2. Heavy Penetrating topspin – sometimes described as a “heavy ball”, this style generates huge topspin that jumps off the court at your opponent and makes it difficult for them to control. This takes a lot of racket head speed and practice to hit and hit consistently.

A very important point to keep in mind is that no matter what shot you hit, it does no good if you can’t hit it consistently. You must practice these different spins religiously to make them consistent. Choosing which spin to hit takes a lot of trial and error, but here are a few basic rules. If you are well behind the baseline, hit with topspin to bring the point back to neutral and give yourself time to improve your court position. From inside the baseline, you can try slices and drop shots. By using spin and not giving your opponent the same shot every time, you put them at a disadvantage and give yourself more opportunities to win points.

As mentioned in a previous tip Returns against Net Rushers it is important to shake up your opponent’s serve early in the match. The earlier they start to doubt their serve, the earlier you’ll break them. While the previous tip dealt with doubles, the following tips can be used in singles as well.

Try the above strategies from your first return game to unsettle your opponent. Remember to play the score when deciding whether to go for the big return and go back to consistent cross-court returns if you get down or tight.

Last week we talked about the basics of the return of serve. A good return of serve is important in doubles…because if it’s bad, there is a hungry net player ready to eat it up. The return needs to be consistently crosscourt, away from the net player.

A good way to practice crosscourt returns is to have a real or imaginary obstacle sticking up at the center of the net…like the handle of a court squeegee or broom. Have a partner serve to you and practice hitting the return well wide of the obstacle into the server’s side of the court. Serves down the middle and out wide will be particularly hard to hit away from the obstacle and/or keep in the court. Practice your crosscourt returns and take the net player out of the equation!

This week we review some basics of the return of serve. Like the serve this stroke is import because you are starting the point. The more returns you put in play, the more pressure your opponent feels on their serve. Let’s look at some general points to remember.

Check out other return tips Backhand lob return and Returns against Netrushers, for more pointers on returning specific types of serves.

Have you ever heard someone say “play the score”? What does that mean? Play the score means, make your shot selection according to whether you are ahead or behind in the game. Whether you are serving or returning, you need to base your shot on the score. If you are ahead in the game, you can go for a riskier shot. If you are behind, you should choose a safer, more consistent shot. What is safe and what is risky? Let’s take a look.

If you are serving from behind. (ex.15-40)…Play it safe. That means serve your most consistent serve (preferably to their backhand) even if it means hitting your second serve.

If you are returning serve from behind. …Play it safe. Hit your return cross court and get the point started.

In both the above cases, once the point starts, rally the ball cross court and deep. Changing the direction of the ball (hitting down the line) is riskier than cross court, and also opens up the court for your opponent. Let your opponent make the first mistake.

If you are ahead in the game, you can try the risky shot. For example, the big serve down the middle, or the kick serve out wide. You could try a return down the line, a lob, drop shot, or any other type of winner. However, you don’t have to try a risky shot just because you are ahead. If playing consistent tennis has given you a lead, why tamper with success? If you are going to try a risky shot, remember when to try that “winner” that we all love to hit. Play the score.

The key to winning tennis matches at every level is consistency. To consistently hit your shots in, you need to setup the same way when ever possible. Getting into position to hit from your strike zone will allow you to hit more consistent, effective shots.

Try the tips above to set up early and hit from your strike zone, for more consistent shots. Remember to keep your feet moving, taking small adjustment steps whenever possible. Play consistent tennis and watch your winning percentage go up.

Today we’ll discuss mental fitness. Many times, especially when you haven’t played much, your strokes will start to break down in a match. This is usually just due to your own doubts about your abilities. You start to second guess your mechanics, shot selection, etc. When you start doubting your shots and missing, use these tips to refocus your mind

All of these actions help to calm you and also distract your conscious mind, the source of performance anxiety.

Developing habits to refocus your mind will help you move past negative thoughts that prevent your shots from flowing smoothly.

A great book on the subject of mental focus in tennis is “The Inner Game of Tennis”, by Timothy Gallwey

Don’t judge a tennis opponent by his strokes

How many times have you been warming up with a new opponent and decided whether you should beat them by how well they hit the ball? Maybe they have a goofy forehand or a weak, frying pan backhand, and you think, “I should beat this joker easily”. Or maybe they are crushing the ball in warm up and you say to yourself, “This guy is going to wipe the court with me.”

Well I can tell you from experience that most of the time you are going to be wrong. Some of the most frustrating losses I’ve had, have come against players with ugly (to me) strokes, no power, and no visible weapons. Conversely, the big hitters in warm up, many times, can’t keep the ball in the court during the match.

Remember this cardinal rule of tennis…

It doesn’t say the person that hits the ball the hardest, or with the best looking strokes wins. If you get the ball in the court more times than your opponent, you win, period! It takes some players their whole life to learn this simple truth. Learn it now and you’ll have a happier, more successful tennis game.

Need some tips on how to keep hitting the ball into the court? Check out our previous tennis tips, including last week’s One More Ball.